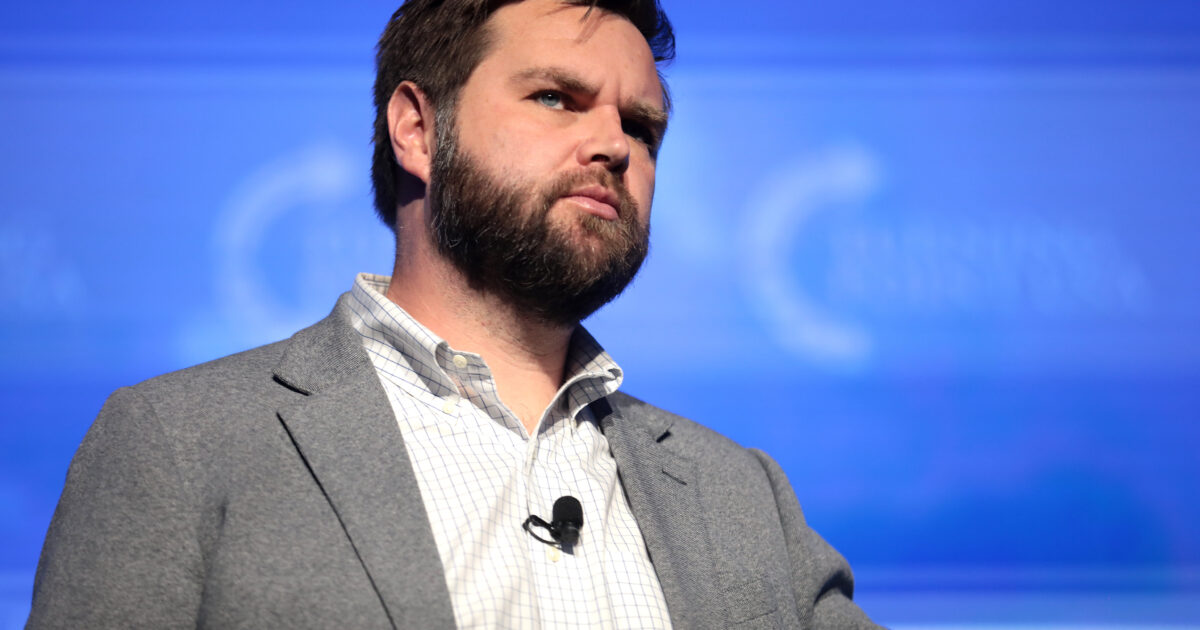 Hillbilly elegy Author JD Vance was already on his way when he took the stage at the first “National Conference on Conservatism” in July 2019.

As 2016 approached, he strongly criticized Donald Trump’s candidacy. “I find it reprehensible,” he tweeted a month before the election. “Dear Christians, everyone looks at us when we apologize for this man.

In three years, his opinions had evolved enough to put him on the program of an event widely seen as an attempt by right-wing pundits and academics to erect an institutional structure – or at least intellectual scaffolding – around the Trump phenomenon.

Earlier this year, just after announcing his candidacy for the United States Senate, he apologized to voters in Ohio for ‘getting the guy wrong’.

But it wasn’t until last week that the full force of Vance’s spiritual reversal became apparent: “I think our people hate good people,” he said. Recount The American Conservative magazine.

“Our people” could be understood broadly as the Republican base, while those they see as despicable could be broadly understood as leftists and members of the coastal elite. Contacted for comment, his campaign press secretary asserted that “JD Vance firmly believes that the political, financial and big tech elites… deserve nothing but our contempt and hatred.”

By suggesting that antipathy to the right outside group is in itself a moral imperative, Vance was engaging a powerful political stream that has recently resurfaced within the Conservative movement. He is not the first to get carried away.

In 2016 and 2017, New York Post Editor-in-chief Sohrab Ahmari has written two lengthy magazine articles to sound the alarms to believers about the rise of illiberalism at home and abroad. “In layman’s terms,” ​​he said in the second track for Remark magazine, “In the real world experience of the 20th century, the Church, tradition and religious minorities fared much better under liberal democratic regimes than under illiberal alternatives.

Two years later, Ahmari had had enough of it all. In a now infamous lined in the Christian newspaper First things, he insisted that the conservatives learn to see “politics as war and enmity”, that they get rid of their “great horror” of “the use of public power to advance the common good”, and that they be ready “to wage the war of culture with the aim of defeating the enemy and profiting from the spoils.”

At the very heart of the new illiberal conservatism is a yen for power – and a shameless willingness to use it to destroy political opponents. Summarizing the problem with libertarians and “establishment” conservatives in an essay last year, David Azerrad of Hillsdale College assaulted “the cowardice and accommodation in the face of left-wing hegemony” demonstrated by the “long list of enemies on the right”. The more “manly” and “combative” conservatism that Azerrad claimed to speak of “understands not only ideas”, he said, “but power”.

Demands like this can only be plausibly justified if the adversaries are irrecoverable and life itself is at stake. “Subdue” or “exterminate” them; that progressives do not hesitate to use state power to achieve their goals; that doing less than responding “in kind” is tantamount to “unilateral disarmament”; that it is a “war” in which the only choices are “suicide” or victory at any cost.

And those sentiments aren’t limited to anonymous accounts on the dark edges of social media. In July, the former Trump official (and “Flight 93 election“essayist) Michael Anton blasted conservatives for failing to respond appropriately to the left’s “proto-genocidal rhetoric”. In February 2020, Harvard law professor Adrian Vermeule entered the hot water when he tweeted that anti-Trump center-right conference attendees would be “the very first group for the camps.” (He meant that their opposition to Trump will not be able to save them from the “gulags” when the “extremist left” takes over, he later clarified.) As talk radio provocateur Jesse Kelly said this spring, “The left and right have existed in a system where only the left plays offense and the right plays defense. They’ve been around in that system for so long. a long time, both sides think it is normal. And permanent. It is not. “

Some things should be clear at this point. On the one hand, it is not a left-right schism. For those I call “Preservatives at will,” the fusionist the right is no less enemy than the progressive left-identity. (Now would be a good time to recognize that hate politics are not exactly foreign to segments of the progressive movement either. Neither side has a monopoly on illiberalism.)

Second, this division is not primarily about technocratic politics.

Consider that the same nationalist conference Vance spoke to in 2019 featured a debate. On the one hand, representing the MAGA faction, Mitt Romey’s former adviser Oren Cass argued that Washington should use its powers of taxation and regulation to prop up American manufacturing against foreign competition. On the other, Richard Reinsch, editor of the libertarian publisher Liberty Fund, has argued for free markets and against state attempts to pick winners and losers.

It may seem that this type of studious bickering over the proper size and scope of government is the main divide on the right today. It’s not. Cass’s top-down industrial planning is about as far removed from my free trade libertarianism as a political agenda can be. But as dispositional liberal, Cass recognizes, as does Reinsch and I, that people can to disagree without despising each other.

The same cannot be said, I fear, of Vance and his compatriots. And once hatred becomes a virtue to be celebrated and opponents become enemies be destroyed, before long, no answer is on the table.

Students of intellectual history can pick up a mind-boggling resonance. The new illiberal conservatives have (sometimes quite explicitly) from a page in the book by Carl Schmitt, an anti-modernist and pro-authoritarian German political philosopher known for insisting that the fundamental distinction in politics “is that between friend and foe.”

It is sometimes said that Schmitt’s ideas were meant to be descriptive and not prescriptive. Yet he clearly believed that removing constitutional limitations on the executive and denying leniency from the outside group was the legitimate province of a sovereign state. Democracy, he once wrote, “necessarily involves homogeneity first and second – if necessary – the elimination or annihilation of heterogeneity.”

As if to prove how strong the current of hate politics can be, Schmitt’s beliefs would lead him to a stint as “jurist of the crown of the Third Reich”. Although he eventually left the Nazi Party, he refused to give up the worldview that made him one of Hitler’s most prominent apologists.

With their talk of enemies, enmity, and the war of civilization, it looks like the new illiberal conservatives have exploited something that isn’t so new after all.

The softness of the water – freedom and fear