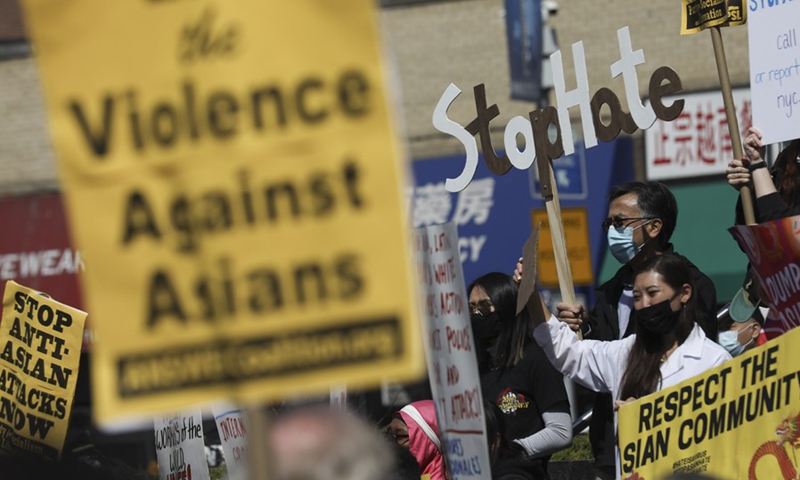 Since the start of the pandemic, discrimination against Asian Americans has spread faster than the COVID-19 virus. Discrimination is a microcosm of racism that exists in the United States in a comprehensive, systematic, and ongoing manner. Why is racism so entrenched in America? Why has a country that prides itself on being the beacon of democracy and human rights for so long neglecting the human rights of minorities? Why did he do it when he often launches baseless, demonizing and rhetorical accusations against other countries in the name of human rights? The Global Times selected the views expressed by some experts during an online event held on the sidelines of the 47th session of the UN Human Rights Council on Tuesday. The event was organized by the United Nations China Association, Beijing.

Huang Huikang, Former Chinese Ambassador to Malaysia and Former Director General of the Department of Treaties and Law, Ministry of Foreign Affairs of China

“White supremacy” is deeply rooted in American society. Many senior officials and political advisers in the previous Trump administration believed in “white supremacy.” In fact, the United States has a long history of racial discrimination over its 244 year history, ranging from the genocide of Native Americans in the early years to the slavery of blacks, to the persecution of Chinese workers to the late 19th century. This went beyond the recent violent execution by a white policeman of an African American, George Floyd.

Historically, the United States has experienced large-scale and sustained anti-China events. The infamous Chinese Exclusion Act of 1882 was the first discriminatory United States immigration law passed in the United States against a particular ethnic group. This act authorized the US government to suspend Chinese immigration, resulting in the tragedy of large numbers of Chinese workers in the western United States being permanently separated from their families in China. It was not until 2012 that the United States House of Representatives passed a bill to issue a formal public apology for the brutal legislation of the law. It seems that the legacy of racial discrimination against Chinese Americans is still strong today.

Hate crimes and attacks against Asians and Asian Americans have increased dramatically since the start of the COVID-19 pandemic. Research has shown that the rise of anti-Asian racism could contribute significantly to the unreasonable political maneuvering of American politicians, especially former President Donald Trump. The term Trump used in his twitter intentionally referred to the coronavirus as a “Chinese virus.” This violated the basic WHO requirement to name a disease or virus. No country or place name should appear in the naming process. Thus, the use of racial and ethnic terms to describe the coronavirus has been the main contributor to the record level of severe racism against Asian Americans. The inflammatory online rhetoric about COVID-19 from political leaders, including Trump, has certainly led to violence against Asians, regardless of their nationality.

The unwillingness of the US government has led to systemic racism going untreated for a long time. This is due to the US government’s long-term governance deficit, which does not put the human rights of all at the heart of human rights governance, and ethnic minorities have been marginalized for a long time. Native Americans, African Americans, Mexicans and Chinese, Japanese and Korean Americans all suffer from chronic discrimination, for example.

It also stems from the institutional deficit in law and law enforcement in the United States. According to Human Rights Now (HRN), an international human rights NGO based in Tokyo, so far there is no national standard for what constitutes a hate crime, and reporting by police services. local police remain voluntary. Three states in the United States still have no form of hate crime law. The United States government has also defined discrimination based on intent rather than the Committee on the Elimination of Racial Discrimination standard, which focuses on disparate impact. This creates a heavy burden of proof. And current US legal standards narrowly define the element of intention, leaving out forms of discrimination that do not appear “hateful” but may nonetheless motivate violence.

The US legal system does not make a clear distinction between free speech and hate speech. Some people abuse freedom of expression to spread racist material and use racism as a political tool, and there is a lack of government control in this regard.

The United States should take responsibility for promoting true equality among all races and ethnicities, through policies and programs. It should also reject all expressions of racist hate speech and discriminatory rhetoric, especially from officials and public figures, and stop disseminating distorted and misleading information and politicizing COVID-19 to avoid criticism from their own deceptive anti-pandemic policies. It should further reform its legal system to address serious violations of the human rights of minorities and define the difference between freedoms of expression and hate speech.

We recommend the establishment of an independent international commission of inquiry to establish the facts and circumstances related to systemic racism, violations of international human rights law and abuses against Asians and descendants of Asians in States -United.

We also urge a Special Rapporteur on Contemporary Forms of Racism, Racial Discrimination, Xenophobia and Related Intolerance to conduct a fact-finding visit to the United States. This should help identify root causes and make recommendations to the US government and report to the United Nations Human Rights Council.

We encourage the UPR and other human rights mechanisms, including special procedures, working groups, forums, advisory committees and treaty bodies, as part of their mandates, to pay attention to the deeply rooted and continuing scourge of racism in the United States and other countries with a racist history. including Canada and Australia, and report on its actions taken in relation to the issue in its regular report to the HRC.

We recommend that the HRC take up the issue under the relevant items on the agenda of its ordinary sessions and take measures to prevent the escalation of racism, racial discrimination, xenophobia and intolerance which is associated with the United States.

Finally, the international community should encourage the United States and other countries with a history of genocide and racism against indigenous peoples and other minorities, including Canada and Australia, to promote cultures of peace. and respect. They should put into practice laws and policies to oppose white supremacism of all kinds, including on social media.