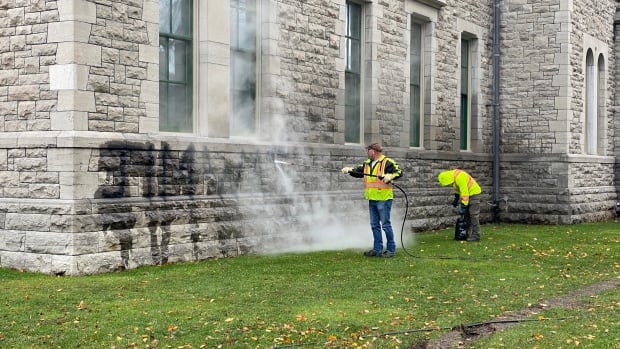 The Ottawa Police Hate Crimes Unit is investigating a series of vandalizing graffiti on the sides of Ottawa City Hall and the nearby provincial courthouse.

Police say they were called to the Laurier Avenue West and Elgin Street area around 8:20 a.m. Monday when someone sprayed anti-Semitic graffiti.

Other acts of vandalism were noted at Ottawa City Hall, including a reference to Ottawa Mayor Jim Watson calling it “fraud”. The mayor’s office is located inside the building.

“The swastika is a symbol of the murder of millions of Jews and the terrorization of millions more,” wrote Andrea Freedman, CEO of the Jewish Federation, in a statement.

She said the symbols are used as intimidating tactics against Jews and as a way to take ownership of their trauma. “It has to stop,” she said.

B’nai Brith Canada said the incident is just one example of a worrying increase in online hatred, and called for Holocaust commemoration across the country “to combat hatred of Jews in education systems “.

Ottawa Police said they were investigating after the discovery of anti-Semitic graffiti on the side of the Elgin Street courthouse and on its sign on Monday morning. Graffiti labeling Mayor Jim Watson a “fraud” was also found at Ottawa City Hall. 0:43

This vandalism is just the latest in a series of recent incidents involving hate messages targeting Jews in Ottawa.

Police last week said they were investigating eight incidents of posters containing hateful and anti-Semitic messages placed in public spaces in the city, including a skatepark in the west.